Excerpted from the forthcoming Book:

“X-POSED: From The Chic to The Sleazy, Stories of My Life”

“There was a time when I could not sleep the night –

when the beat of the streets would call me forth,

when evening energy so beckoned calling my Name aloud…

There was a time so exhilarating, so exciting, that each nite unfolded with

There was a time when all seemed possible…” As soon as dark descended I felt the irresistible

pull of the streets – the tug of a newly-discovered. Nightlife.

NYC was the epicenter of an extraordinary life after dark.

colorful cascade of characters and fabulous scenes I was forever discovering.

This story began in the nitty-gritty East Village, at the Electric Circus on Saint

become a Patron and friend.)

The Circus was the place to trip, get high, listen to fabulous music, and have sheer 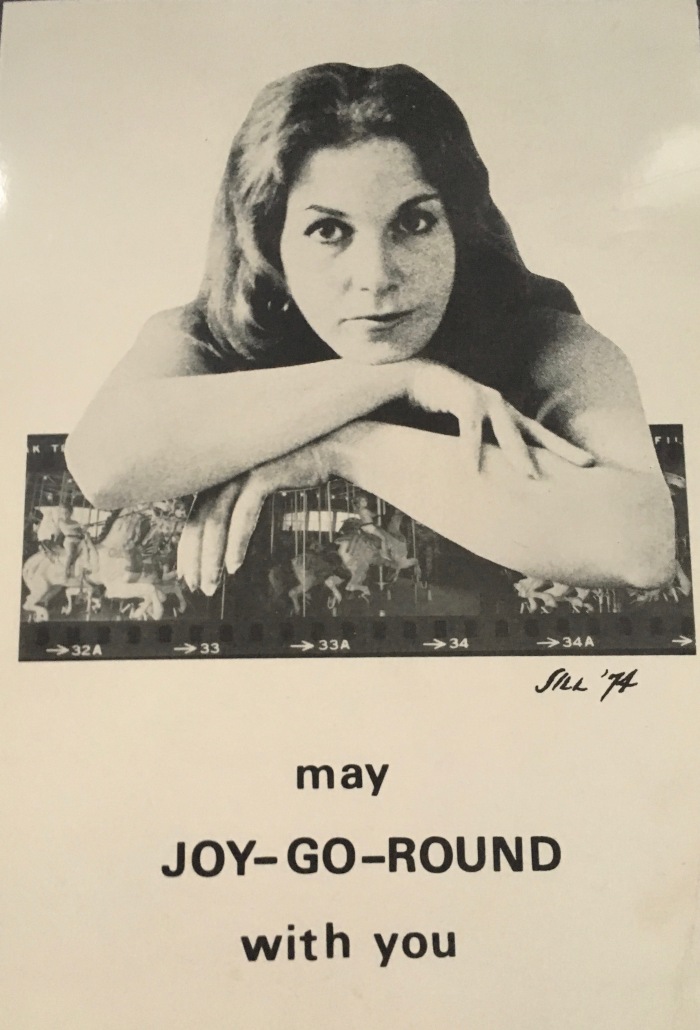 Jill Lynne Holiday Card, © 1974, 2018 Note that I am resting on a B&W Film Strip of Daughter CoriAnne Riding A Central Park Carousel Horse

And playing about in the downstairs VIP area.

Lounging on the luxe banquets, a couple approached and I instantly recognized it was

Truly, I do not remember what occurred in our interchange, but soon after I was

being whisked away in a shiny limo to the silver-toned, creative den of iniquity,

The rest is truly Herstory!

Several years later, I was a quasi-established Photo-Artist, regularly exhibiting my

Work, – especially the POP ICONS Series – “Portraits of the Rich and the Infamous” –

Proofed – Enhanced and Transformed – , with the very first Computer Technology –

which I am credited with being the First Woman to use…

Creative Genius, And Futurist, the Maestro of Clubs, Rudolf (Danceteria, Pravda, the

Rudolf had one foot firmly planted in the future…

questionable affiliation, moved to him to Brazil.

A child of reaction-formation, he became the most open, radically tolerant, expansive

individual I had ever known.

Rudolf believed in me, supported my Art and “Grew Me Up” in myriad ways

and for that, I will always be grateful… 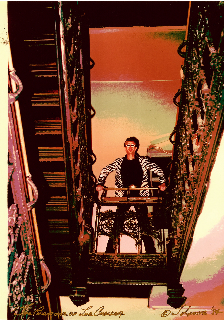 Club, he coolly reminded Moi to carefully check the Exits…

There are epiphanel days and nights that forever change the course of one’s Life.

Such was the following …

On that eve, Regine’s (the NYC version of the elegant Paris’ hot spot.

was filled with the chic and tres social. Femmes in gorgeous pro-forma

Pocket squares and matching ties, the posh clinking of crystal toasting champagne, to

the sparkle of light Laughter.

After Regine herself’s ever-gracious greeting, I slowly meandered through the “beautiful

People”, intermittently stopping to exchange hellos, snap a photograph, receive a hug or

Shake a hand in introduction

Leaning against the front bar were smiling familiar faces – “journalists”. Thought I.

Finally at the rear of the club, I entered into the very VIP Room.

Immediately, I came upon Andy Warhol enjoying dinner with the notorious Roy Cohn –

Of the hideous McCarthy trials…

Yes! Andy did appreciate the company of the unexpected and diverse….

The News had just written about Moi, labeling me a “Female Andy Warhol”…

When ANDY saw me, he abruptly stopped his Dinner chatter and raised up two

I snapped …the now celebrated photograph…

Later I proofed it with the new Computer tech I was privy to.

Now this could be the conclusion, of a special eve, but it was not! 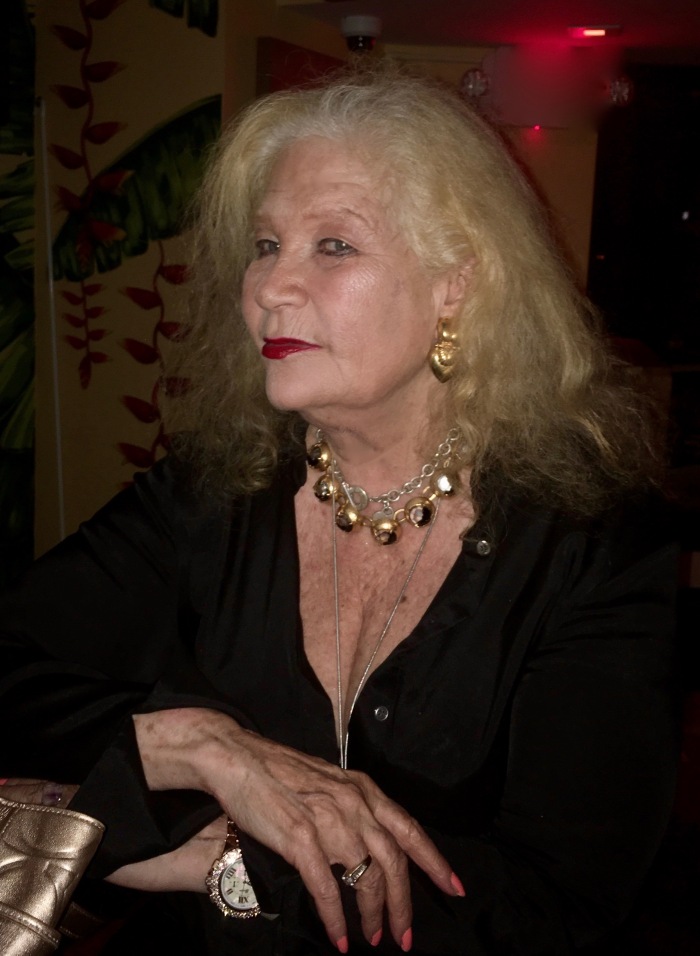 running through the club flapping her arms and screeching,

Shocked, I turned to the man alongside me – who just happened to be the quite debonair

“I dreamt this!” I had a premonition!…

Later on as I got to know this lovely and talented Designer, he would chuckle when he

reminded Me of my first words to him.

When I finally broke out of my daze, most of the crowd had already fled the club or

were drinking it up at the Front Bar.

I was gently pushed up front and thrust into the arms of two men.

“We saw you yesterday,” said one,

“You were photographing Debbie Harry, (Blondie) …” The other chimed in.

,”Why don’t you come up and show us your Photographs?”

They were Brant Mewborn and Jeff Cason, Editors for AFTERDARK Magazine – the

It was the Life-Changing beginning of yet another saga…

But dear Readers, that’s another Story! 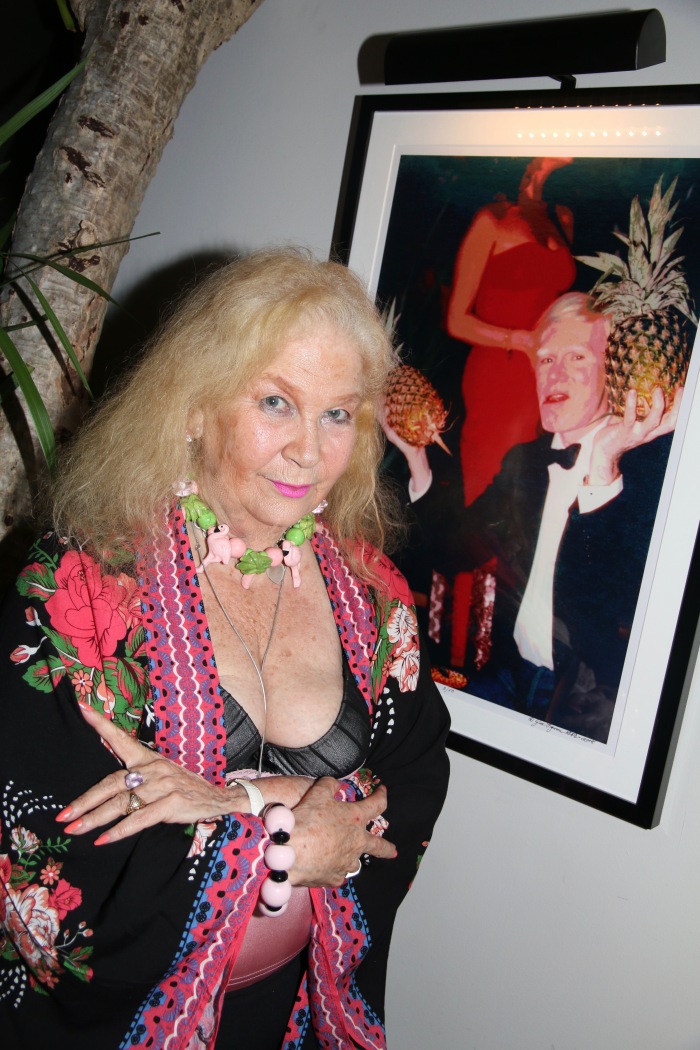 Title and Content Registered with The Writers Guild of America